On May 4th of 1970, the Kent State Shooting occurred. You can read about the details on the “About Kent State” section of our website. Immediately after the fatal incident, antiwar protest reached its peak during this period. We consider 1970 to be a seminal year, dividing our project in two: before and after student activism became more mainstream. Davidson College students were no different than their peers nationwide, and photos from the College Archives demonstrate how they participated in making their voices heard, peacefully. 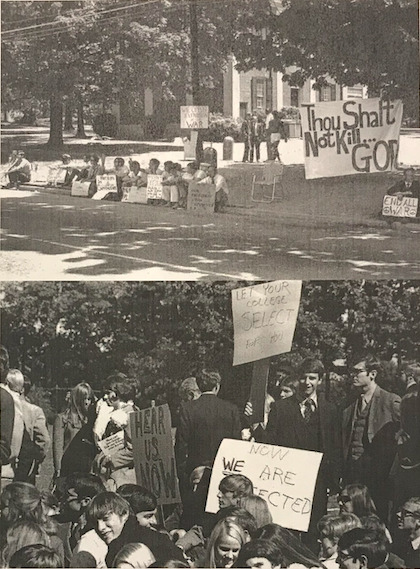 After the tragic events at Kent State in the beginning of the year, 1970 proved to be a watershed moment for the campus protest movement. [1] Anti-war protest rates were at their highest across the country, even at schools where those political views remained in the minority. Davidson was no exception; the only protest photos from the era were from 1970. Both events pictured remained peaceful, as did every demonstration held on campus. Despite the volatility of other campuses, Davidson’s small size and community emphasis on civil discourse meant that students were committed to keeping the college safe (“Davidson is not Berkeley,” proclaimed a letter to the editor in the 1968 Davidsonian.) 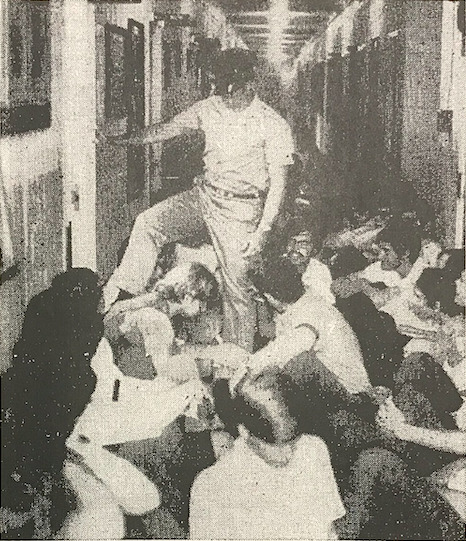 This photo taken in 1970 shows a Davidson ROTC officer stepping over students participating in a sit-in at the ROTC offices in protest of the Vietnam War. [2] The sit-in resulted in the shortening of an ROTC drill and is just one of multiple instances of protests against the ROTC program. Davidson students were also involved in activism against the war outside of the protests against the ROTC. This was seen in the Davidson Peace Coalition, which was a student organization supporting the end of the war. The coalition organized numerous activities on campus, including fasts, film viewings, and distributing handouts about the war. The coalition also organized student trips to larger Vietnam War protests in Washington, D.C. While Davidson did not have the level of protests seen at other schools, students were still involved in peaceful protests and other forms of anti-war activism.