From its inception in 1837, Davidson College has had close ties to the Presbyterian Church. Recent students have criticized the limitations presented by the school’s religious roots as recently as 2020, as in this Davidsonian article. However, student protests against the religious influence on the school's culture are far from new. 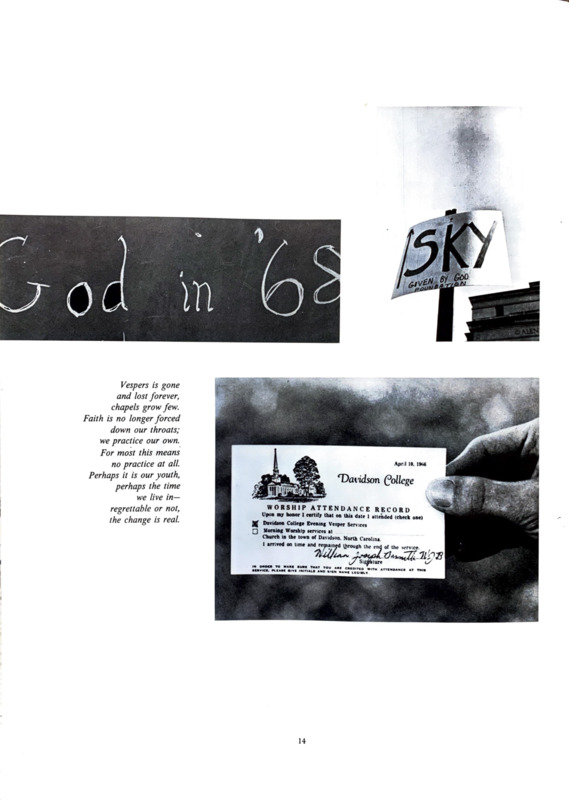 As early as the 1960s, student publications have shown a trend of explicit detachment from the religiosity of Davidson College. Quips and Cranks, the school’s yearbook, has served as a medium for these takes. Its 1968 issue reads, “Faith is no longer forced down our throats; we practice our own” [1]. Until the 1970s, students were expected to treat church like a class, meaning they were penalized for being absent. This line reflects the students' attitude during the last years of required Chapel attendance. One alum '68 remembers other forms of protest from students of the time, particularly their choice to wear ROTC uniforms to Chapel. This display was a play on the perceived “militance” of Chapel [2].

Similar sentiments are shared in the 1962-1963 issue of Inklings. This collection of first-years' works allowed students to share their opinions on not only school-wide, but state-wide and national issues of the time. One of these issues was religion and its relationship to substances. For example, David Orr ‘66’s essay “The Church and Young America” speaks to the Church's isolating tactics that the speaker felt targeted young people. The idea that partaking in smoking and drinking will “lead them down the road to damnation” drove students away from organized religion [3]. The speaker posits that religion is especially “unimportant” to college kids, potentially for the same reason as the Quips excerpt, which continues, “Perhaps it is our youth, perhaps the time we live in--regrettable or not, the change is real” [4]. 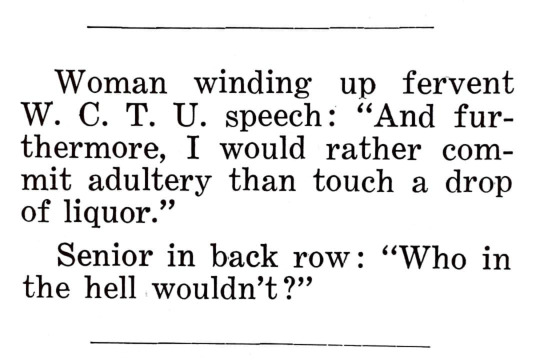 Alcohol as a sin is inevitably a running theme in earlier issues of Scripts 'N Pranks like the December 1959 publication. In his short satirical story, “The Tale of the Dub-Dub,” John A. Chiles ‘62 writes, “a brewer brews, and to do this, I’ve been told, is a sin” [6]. This excerpt seems to imply that the speaker only perceives alcohol as immoral because he has been told to. Scripts and Pranks also gave students a platform to make social commentary, particularly through humor. One joke from the February 1965 issue describes a woman giving a speech at the Women’s Christian Temperance Union. It reads, “...I would rather commit adultery than touch a drop of liquor.” A senior in the audience responds, “Who in the hell wouldn’t?” [5]. This joke simultaneously highlights the particular disdain Christians held for drinking at the time and presents sexual fulfillment as better than drinking, while situating women as the punchline.

Students seemed to be acutely aware of the hypocrisy of the Christian church. A poem from the April 1961 issue of S 'N P entitled "A Fable for Davidson Critics" by Hansford Epes ‘61 says "Look there! A whole band of our most pious men: / Taking care that on campus no student does sin. / Though their ideas on learning may be a bit rusty, / It takes no great knowledge to be made a trustee. / You drink? Not here in this noble democracy / That’s ruled not by God but by Christian hypocrisy” [7]. According to the same alum '68, students noticed a similar disconnect between the supposed Davidson College values and their handling of alcohol policies. Similar to their policies in the 21st century, the school only seemed concerned about alcohol consumption as much as it impacted other's perception of the institution. The administration only pushed punishment for those who were obviously and publicly drunk and/or causing a disturbance [8].