Davidson did not admit female students until 1972, several decades after the last publication we examine. Despite the lack of women behind the scenes and actually on campus during this time frame, women were one of the most common subjects for humor throughout the various time periods and publications. Several jokes contain women simply as characters without their gender tying to the punchline, but the vast majority of jokes that feature women use their gender in some form as part of the joke.

Jokes about women largely manifest in two ways: women as the subject of humor, or using women more as objects within humor to deliver a particular punchline. The majority of these jokes revolve around the idea of romance or hooking up; there are few times when jokes about women are divorced from these topics. That likely stems from the atmosphere of the campus at the time. With Dvaidosn not yet being co-ed, students likely would have had freer reign to use women as humor subjects as there were not many at the school to object or question the nature of these jokes. Additionally, the age of students makes the discussion of romance and dating a pertinent topic. A large number of students were likely either pursuing women or at least interested in pursuing women. As a result, despite women likely did still play an important role in campus culture, making them a topic many readers could find relatable.

As mentioned previously, the majority of these jokes center around romance, indicating that the largest role women played on-campus culture was in the dating scene, or at least that was the role students mostly cared about. The women featured in jokes were often young, similar to the college-aged students. Many of these jokes often paint women as a type of temptress, someone who will take advantage of women. The December 1932 copy of the Yowl contains a lengthy joke by anonymous titled “It’s the Women who Pays”.  This joke largely satirizes the idea that women struggle in dating, almost bitterly describing the several ways they seem to take advantage of men who are interested in them. These jokes paint women in a rather cruel light and hint at some sense of animosity. The other common depiction of women in jokes about romance seems to flip that notion on its head, painting women as innocent and naive, often more easily manipulated by men. One joke in the November 1936 Scripts N’ Pranks shows a girl asking hopefully if she is the first girl the male character has ever kissed. He replies that she looks familiar, indicating that he indeed has experience. The joke seems to suggest a hopeful naivety on part of the woman, who seems to wish to be special to her partner, while to the man she is just one of several. 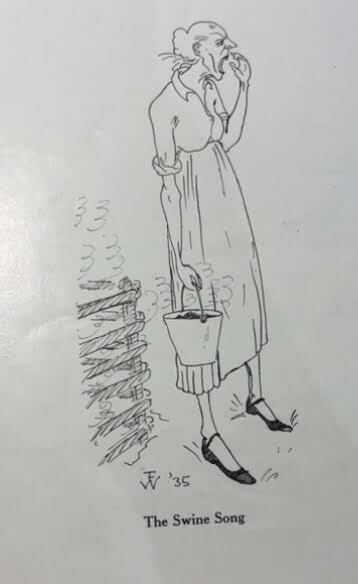 However, there are occasional jokes that bring up age and target older women. That often happens in jokes which revolve around married couples and often poke fun at one-half of the couple or the institution of marriage. Some of the jokes do mock older women, often implying they are frigid, old maids, swine, etc. The December 1932 issue of the Yowl contains a cartoon of an older woman calling out with the caption underneath describing it as “The Swine Song”. The caption seems to refer both to the action, the woman calling what is presumably pigs to a pen, and the woman herself. Jokes like these imply that youth and beauty were deemed and villainize the process of aging for women.

Additionally, the lack of female students means women did not have the ability to contribute any of their own jokes or humor within these publications. Therefore, even when the joke is not at the expense of women, it still ultimately comes through a male gaze and perspective.