As discussed in the introduction, students had a few directions to take their jokes. Vertically, they could look down toward minorities or women, or above them toward the administration. But horizontally, they could view themselves or their classmates as subjects of humor. In the latter case, they could either applaud or belittle whoever was the butt of the joke. These forms, self-deprecating and self-aggrandizing humor, mostly appeared in the annual, Quips and Cranks. 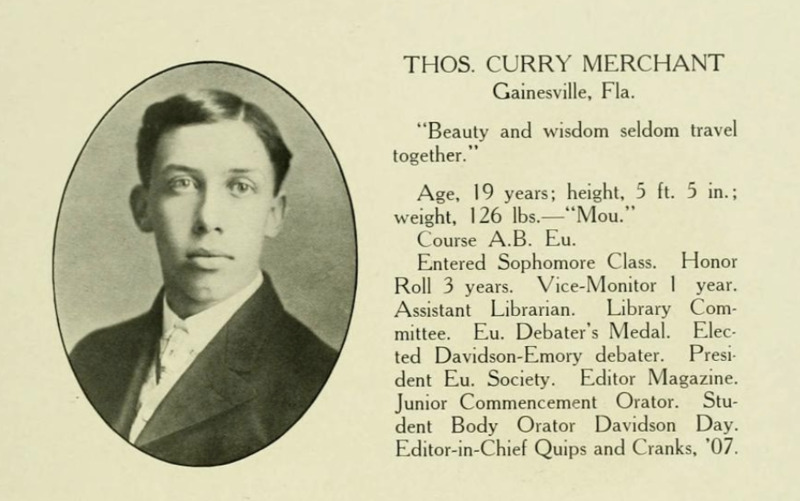 In each publication, the senior class would publish short bios of each graduating member along with a quote of their choosing. In 1907, a student named Thos. Curry Merchant chose, “beauty and wisdom seldom travel together.” [1] From this quote, we can deduce both that Mr. Merchant was a very wise man, and that self-deprecating humor had a place at Davidson. A peer of Merchant’s, Plumber Smith, made fun of his supposedly poor luck with his quote, “there’s the humor in it.” [2] Students of the time were self-aware enough to make jokes at their own expense publicly. Not only did students poke fun at their own insecurities behind closed doors, but Davidson was a place where students openly performed self-deprecating humor. 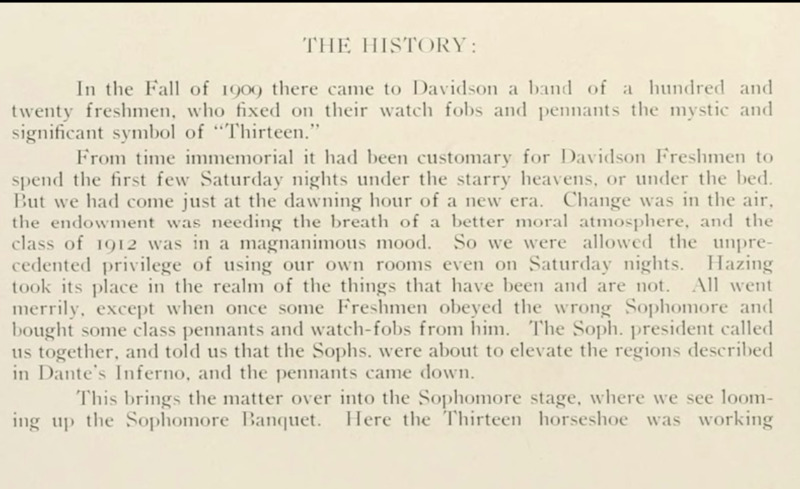 Moving from the level of the student to the level of entire grades, at the end of the year, each class would write a mock epoch to recap the successes of their year. The tales often dramatized banal events, morphing a football game into a battle or paralleling a simple speech with the Gettysburg address. Class historians — the authors of such pieces — put down the other classes to elevate themselves above their peers. In his piece, “American humor as an experience of growth,” Gert Raeithel discusses exactly this notion. He claims laughter and humor function to provide an experience of growth. [3] The classes of yore needed something to distance themselves from who they were at the start of the year. By cracking jokes about the time spent in chapel or class, they manufactured and captured their own growth.

Through time, these mock epochs lost steam, and the class histories matured into dry recounting of the year’s events. In 1931, the junior class history praised intellectualism and athleticism rather than humor. [4] In prior years, class historians almost always applauded the wit of their grade alongside with these other attributes. Nevertheless, the self-aggrandizement continued, with class historians continuously praising the virtues of themselves and their peers. Perhaps Raeithel’s ideas falter here: students can express their growth even without humor. Still, Self-aggrandizing humor appeared in other publications of the time; The Yowl ran plenty of short stories centering on the virtues on the protagonist in 1932. [5] Moreover, any humor in a way is self-aggrandizement. By publishing their works, students claimed their voice was worth a listen, and they were funny enough to be heard.

While in a way separate, as it often aggrandized their peers rather than the author themselves, the short bios of the senior class in the annual align with humor elevating or expressing growth. Not only do editors use humor to praise their classmates’ virtue, they praise the humor of their classmates. Carl Homer Kathy, a student in 1920, was praised for the laughs he garnered with his, “n-word” impression. [6] Of course, this commendation suggests the further prevalence of racist humor, but also expresses how desirable it was to be funny. In the same sections, editors wrote highly of their classmates’ work ethics and athletic achievements. The classes of old valued humor as highly as intellectual prowess or competitiveness. The specific example of the Cathey prompts a questions or research in archives failed to answer.

Cathey’s antics prove that oral, or performed, humor had a place on campus during this time. But how did it align with the material published in Quips and Cranks or The Yowl? No evidence suggests verbal humor was a pure extension of the humor published around campus; we find it hard to believe that students went around reciting mock epochs as their method of cracking jokes. Nevertheless, much of the humor found in these publications were brief puns or one-liners, both of which could easily be dropped into conversation. Further, Cathey’s impression shows a form of humor omitted from any written publication.  Physical humor, a form not preserved in archives, had a place on Davidson’s campus in the early 1900s.

Returning to the short bios in Quips and Cranks, one student in 1920, James “Purity Jim” Whitted Witherspoon, was praised for graduating college with a “minimum of exertion.” [7] Across the board, all profiles of students praise them for their virtues with humor, both deprecating and aggrandizing. The positivity shows us the comradery of the class. Moreover, the applause of peers shows a divide between who is on the inside, and who is left out. Students can withstand teasing from their peers; a joke about a classmate’s laziness fits inside a profile detailing his virtue. However, humor at the expense of women or minorities ridicules without redeeming any of their qualities. Playful jokes target the in-crowd while aggressive jokes aim for the outsiders.