A contemporary student can easily forget Davidson College has deep southern roots, planted during antebellum and grown through the civil war, reconstruction, and Jim Crow. The college of the 21st century mostly transcends geographic bounds. In freshman dorms, newcomers share their horror at the gas stations and supermarkets at which their friends shopped growing up, “ew, you had Kroger,” or “Wawa is so much better than Sheetz.” On Sundays, students from Philadelphia wear their Eagles Jerseys and Bostonians wear their Patriots garb, and they’ll tease each other about the game. Nevertheless, friend groups form mostly based on similar interests and whichever hall the housing lottery sticks you in during your first year. In the early days of Davidson College however, geography mattered. Each state, or even county, would have their own club. These groups ran parallel to the more established literary societies, but with their own mascots, leadership council and club slogan. Two of these groups, the Alabama club and the Georgia club, took their page in the annual as a place to crack some jokes. 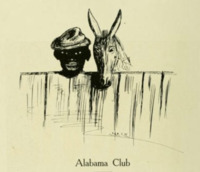 Legacies of racism make both states easy targets for critique, but the clubs expose their racism too transparently to ignore. The first abhorrent jokes appear in the 1900 edition of Quips and Cranks; the Georgia club used a cartoonish Black boy eating a watermelon as their mascot while the Alabama club illustrated a vaudeville-esque cartoon of a Black man with his mule. [1][2] These trends continued, and the atrocity of their humor would escalate. In 1920, the Georgia club reenacted an entire lynching scene to be photographed and published in the annual. Group members posed around a strung up Black man with pitchforks and rifles. To them, racism and racist violence was not just a joke behind closed doors, it was an act to be performed. The performance of racism aligns with broader American, or at least southern, humor of the time. Vaudeville shows and blackface acts would draw huge crowds and entertain the masses. [3] Lynching itself was a form of entertainment. According to the NAACP, White Americans carried out 4,743 lynchings between 1882 and 1969. [4] The mob executions were a mass gathering; people would picnic around the lynching site. [5] The depictions published in Quips and Cranks demonstrate the prevalence of lynchings and exhibit how violence became entertainment. 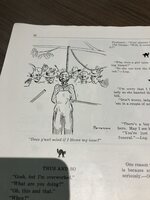 Racist depictions of lynchings continued well into the 1930s. In 1936, in the final edition of the humor publication The Yowl, Buford Patterson illustrated a lynching scene; a Black man stood with a noose around his neck, with the caption reading, “does y’awls mind if I blows my nose?” [6] The pattern of violence shown through the Georgia club’s photograph and Patterson’s picture signify an embrace of horrific racial violence. The editor expressly praised Patterson for offering, “the classic lynching scene” to the final humorous publication on campus filled with “gems of wit.” [7]

Patterson’s life outside of Davidson was nothing short of tragic. According to the archives at University of North Carolina Charlotte, he was born to a poor presbyterian family in Charlotte, and in 1936 scraped together enough money to enroll at Davidson College. Unfortunately, two years later, money troubles forced his departure from the college and he joined the military to finance his education. His schooling would never finish. He was captured in WWII and forced along the Bataan Death March. On his return to the United States, he would try to succeed as an artist only to succumb to alcoholism and live out the rest of his life working menial-labor jobs. [8] Nevertheless, this tragedy only explains his circumstances and does not excuse his racism. 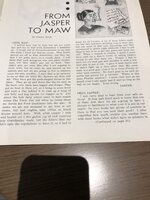 From Jasper to Maw, A Classist Story from Script and Pranks November 1936 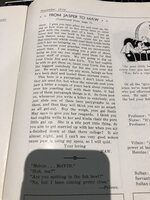 From Jasper to Maw, A Classist Story from Script and Pranks November 1936

We should note here that poor whites were often the butts of jokes themselves. Jennifer Beech, in her article “Redneck and Hillbilly Discourse in the Writing Classroom: Classifying Critical Pedagogies of Whiteness,” suggests “class is the power some people have over the lives of others, and the powerlessness most people experience as a result.” [9] In the case of poor rural whites, which we could refer to as rednecks, their powerlessness comes from the privileged class “othering” them, and depicting them as inferior. In 1936, a story appeared in the inaugural article of Scripts and Pranks making fun of redneck intelligence. The piece, titled “From Jasper to Maw,” reads like a letter from a student home to his mother, and uses exaggerated dialects to paint hillbillies as stupid and illiterate. [10] The line “jest about the hole dang school came in here makin noises like Uncle Jim did when he heard about me drivin his Ford limmizene into the lake,” sums up the attitude toward poor white people assimilating into Davidson. [11] The piece clearly “punches down;” a higher-class peer makes fun of his poorer classmates. In both cases, the jokes resting on class and the jokes relying on racist prejudice, the creator of the jokes elevates themself by belittling those with less power. Classist humor extends the power dynamic shown through racist humor.

While not outwardly violent, no joke at the expense of rednecks depicts anything as egregious as a lynching, both racist and classist jokes affirm the status of the joke teller. Punching down is a privilege, and ridiculing people of less social standing shows the rigid hierarchy of early 20th century Davidson.