Throughout the reviewed publications, one of the most common humor subjects was class years, in particular jokes that revolved around freshmen. These jokes could appear in multiple forms and mediums, showing up in sources ranging from Quips and Cranks, the official college yearbook, to Caps and Bells, the student publication that only ever printed one issue.

In general, these jokes target the freshmen’s naivety, painting them as ignorant and unaware of college life and often the larger world in general. Many jokes note the ‘greenness’ of freshmen, a term meant to describe new and fresh people as unripe and still learning. These jokes take advantage of that fact and the publications  find humor in giving freshmen incorrect advice, intentionally misleading them with false expectations of college life, manners, etc. Many of these jokes appear too exaggerated to be serious attempts to trick freshmen, but instead, perhaps mean to cement and illustrate the ignorance of first years. They have no college experience yet and are often learning as they go, and these jokes highlight that fact and imply a contrast with older students. These jokes also often degrade freshmen. One joke by anonymous in the November 1931 issue of the Yowl uses freshmen as a punchline. A student remarks that a room is a single in response to hearing that it housed both a freshmen and an extraordinary man. The joke clearly seems to imply something negative about being a freshman, indicating that you cannot be one and a brilliant fellow, highlighting the condescending attitude many of these jokes seem to take.

In fact, the audience of these styles of jokes largely don’t seem to be freshmen, but upperclassmen instead comparing their own knowledge and understanding to the inexperienced and ‘dimwitted’ freshmen to cement their own, higher position. They are no longer the uncertain freshmen, but instead the more knowing older students. Jokes aimed at freshmen as a whole  cement upperclassman status and encourage a sense of student unity. Freshmen arrive every single year, making them always an available target for humor and a subject that everyone has experience with and can easily rally around. Every upperclassman has at one point been a freshman and can usually relate to the content within these kinds of jokes. That makes these jokes widely accessible. This humor to come across as almost a rite of passage. These kinds of jokes popped up every single year, meaning every Freshman has been subjected to this treatment. Being an upperclassman means they can no longer be on the receiving end of this target and can now finally be the giver. In many ways, it functions as a form of light hazing. 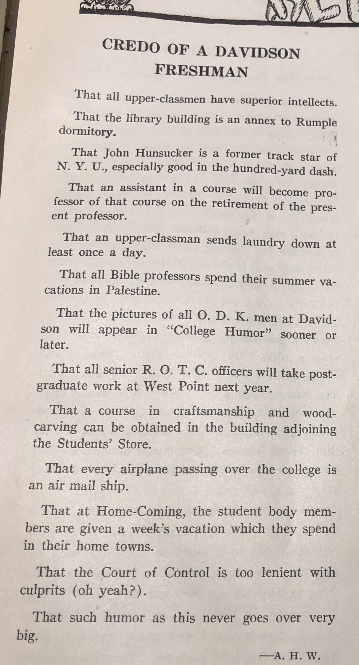 However, freshmen were not always the only years that could be subjected to teasing and mockery. Occasionally jokes would pop up that put the juniors, seniors, or sophomores on the receiving end. Sophomores largely received mockery for their sense of superiority for no longer being freshmen, while Seniors would be called out for their laziness now that they approached the end of their college years. Caps and Bells contains one joke by example that seems to even reverse the traditional idea format of generally mocking the older classes less, pointing out how increasingly complicated the process of simply stating confusion. The freshmen are described as voicing a simple "huh?" in response while seniors are overly verbose. The joke appears to be poking fun at how overly pretentious responses and contributions can become as people continue in their college experience.

Another joke in the Yowl, “Credo of a Freshmen,” seems to adapt a freshmen perspective, satirizing the traditional form of jokes aimed at freshmen. While many jokes aimed at freshmen compile fake advice, this joke compiles a list of fake lessons freshmen supposedly learn.  One line remarks how "all upper-classmen have superior intellects," poking fun at the common theme within these jokes that upper-classmen are inherently smarter. The ending even implies that freshmen as a subject of humor are low-hanging fruit, remarking how jokes like this “never [go] over very well.” While the status quo may have been to mock freshmen, these kinds of jokes show that it still was often challenged.