One common subject of humor seen throughout the different decades and publications was jokes that targeted the administration. In particular, these jokes often contained professors as the subject, teasing and lightly mocking their attitudes and the way they run their classes.

These jokes provided a venue for students to voice complaints and criticisms they otherwise would feel barred from doing. Within daily life and in the classroom, the school administration and professors largely hold power and control. However, within these literary publications, the students have control, flipping the dynamic and giving them a space where they can exert power over the administration in language. While students may encounter the dean and other administrative staff frequently, it’s professors who largely see students on an almost daily basis. The abundance of professors as subject matter likely stems from the increased presence they are within student life. 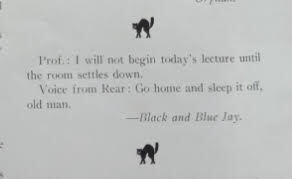 Many of these jokes also seem to be vehicles to voice frustrations and complaints that could receive backlash within the class. Many jokes imply the professor lectures are boring and dull, commenting about how the professors drone on and do not deliver particularly enticing lectures. The frequency of these jokes suggest the commonalities of such feelings, something likely every student has felt at some point in their college career. But, within the classroom there are often few opportunities to voice these concerns and emotions, to change the structure. Even if given the opportunity, there is no guarantee the Professor will take it well or will listen. These literary publications perhaps then provide space where complaints can be voiced and expressed, using humor as a means to reverse the power balance. One such joke appears in the December 1932 issue of the Yowl, with a student heckling a professor in hopes that he will end class early. Many of these jokes likely also do not mean to serve as vehicles to actually change or challenge the structure of classes, but instead, simply allow for a place to vent and laugh at the often tiring academic experience.

Jokes about professors often center around a few different themes. Many largely lament the boring and dull nature of many professors’ lectures and classes. Another common brand focus is the idea of an absentminded professor, painting them as slightly socially ignorant despite their intellectual prowess. 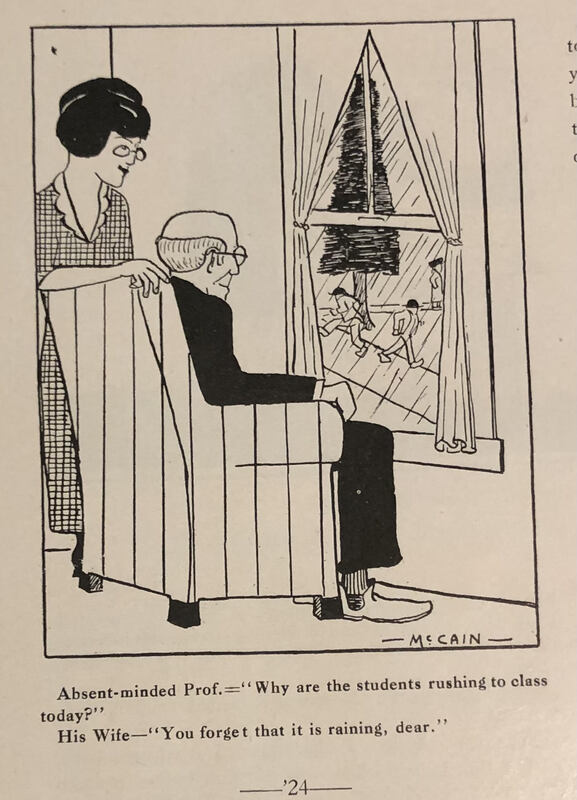 One such joke appears in Cap and Bells with a cartoon depicting a professor and his wife gazing at women in the rain with the professor unsure why students are rushing to class, only for his wife to remind him that it is raining. The joke seems to poke fun at professors who don't notice weather conditions and are absent-minded. Several jokes in this vein also seem to imply a self-absorbed attitude since the professors are so caught up in their own knowledge and experience. One joke in the 1933 May issue of the Yowl describes a monologue as "a conversation between a student and a professor". That joke furthers this idea of the professor as out of touch, implying that many will go on and on without actually listening to input from students, likely just wanting to hear themselves talk. Several of the jokes combine these two common themes, pitting the bored and smart-ass student against the intellectual, yet naive professor. The commonality of these themes perhaps indicates that students throughout the early 1900s through 1930s found their professors out of touch. They seem to reflect not just administration vs. student, but the old vs. the young. Many  jokes acknowledge their knowledge around the subjects they teach, but emphasize how that does not make them all-knowing or able to always understand their students.

However, these publications were not totally safe from the power of the administration. Caps and Bells ran for only one year, 1923, because its content was deemed controversial. Largely though, unless significant boundaries get crossed, which are not always administrative related, Davidson has left these spaces as a place for students to explore their feelings around the school system.