Unsurprisingly, a dominant tone of classic college-boy humor towards alcohol permeates student publications. What may be surprising, however, is the blunt manner in which Davidson students joked about alcohol during the 1960s considering drinking was prohibited until 1968. The main humor publication during this period was Scripts ‘N Pranks, which was released three to four times a year from 1936 until February of 1965. The issues were filled with satire, short stories, cartoons, and jokes, many of which were astonishingly crude. The jokes about drinking were not disguised, perhaps reflecting the students’ willingness to rebel against the administration and the administration’s willingness to turn a blind eye to alcohol-related activities. 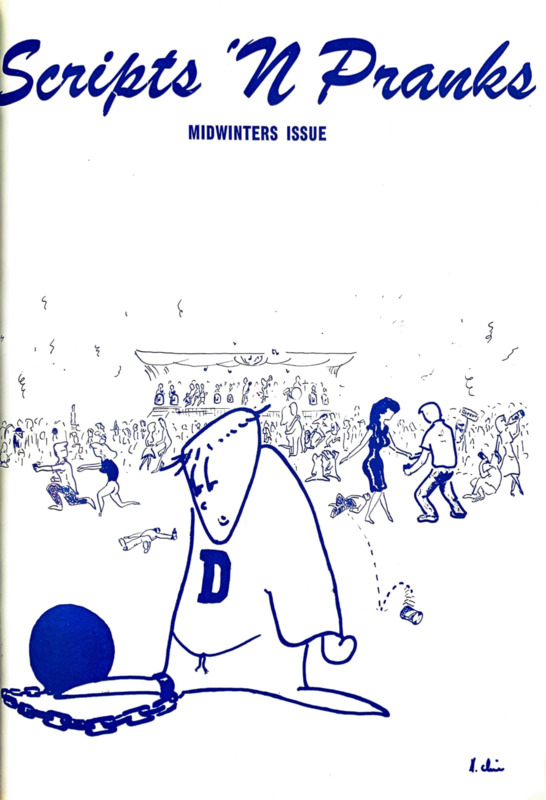 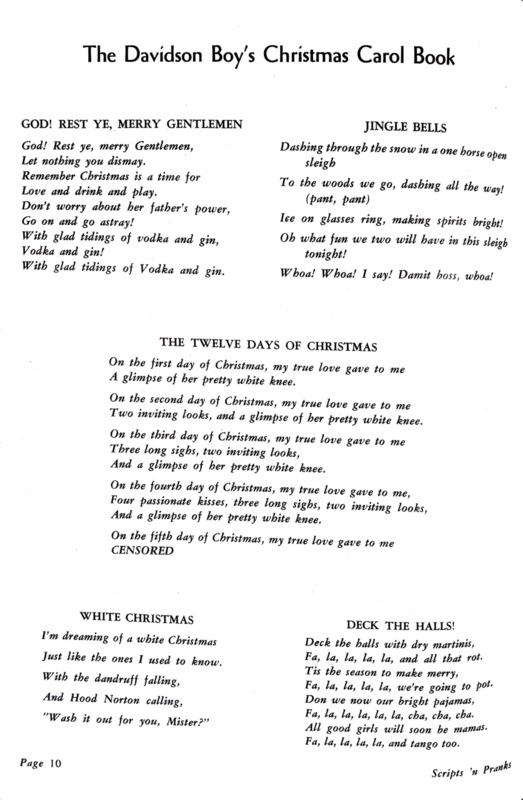 Even prior to the ‘60s, Davidson students poked fun at drinking policies. In the April 1958 issue, Charles Davis ‘58 and Bill Long ‘58’s brief satirical piece entitled “Frost After Hours” addresses the “sophistication” of the Davidson Gentleman and his choice in extracurricular activities. The section on “Dining --- Drinking” reads: “We don’t know a thing about this stuff---Nothing! Honest, we don’t --- because it’s a bad thing (or something)!” [1]. The humorous piece both ridicules the administration’s attitude toward drinking and reveals the students’ view of the policies as illogical with the sarcastic phrase “bad thing.”

Not all humor addresses the administration directly, however, but simply makes drinking jokes through forms such as parody. In a parody of Christmas carols from the December 1959 S ’N P, Bill Armstrong ‘61 inserted many drinking references into the lyrics. For example, the chorus of “God! Rest Ye, Merry Gentlemen” is “with glad tidings of vodka and gin, / Vodka and gin! / With glad tidings of Vodka and gin.” The parody of “Jingle Bells” includes the line “Ice on glasses ring, making spirits bright!” while “Deck the Halls!” begins with “Deck the halls with dry martinis, / Fa, la, la, la, la, and all that rot” [2]. The lyrics are cheeky, taking songs from a traditionally religious and wholesome holiday and infusing them with alcohol references. 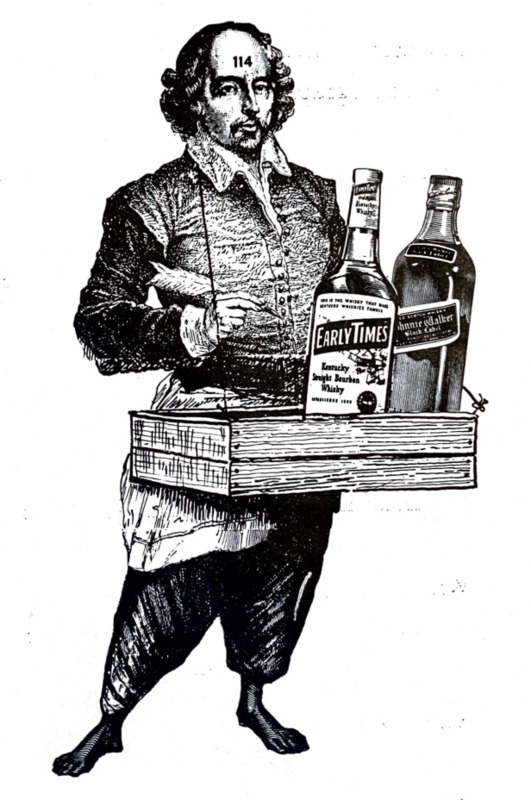 The S ‘N P editors also took advantage of cartoons to extend their alcohol jokes. The writers began opening each issue with a satirical section akin to an editor’s note in the early 1960s, called “The Bar Sinister.” In the December 1962 “Bar Sinister,” the narrator tells a strange story including a freshman who was forced to run down to the liquor store and “bring back a case of Xmas bourbon,” returning with a bottle of Early Times Kentucky whiskey [3]. There is an accompanying image on the opposite page of Shakespeare (representing the freshman) with a bottle of Early Times and Johnnie Walker, and strangely, an IQ of 114 “tattooed” on his forehead [4]. The suggestion that the Scripts ‘N Pranks writers are as brilliant as Shakespeare, with a slightly above-average IQ of 114, paired with the bottles of whiskey seems to be a joke about the “refined Davidson gentlemen” needing alcohol to write this publication and survive the holidays. 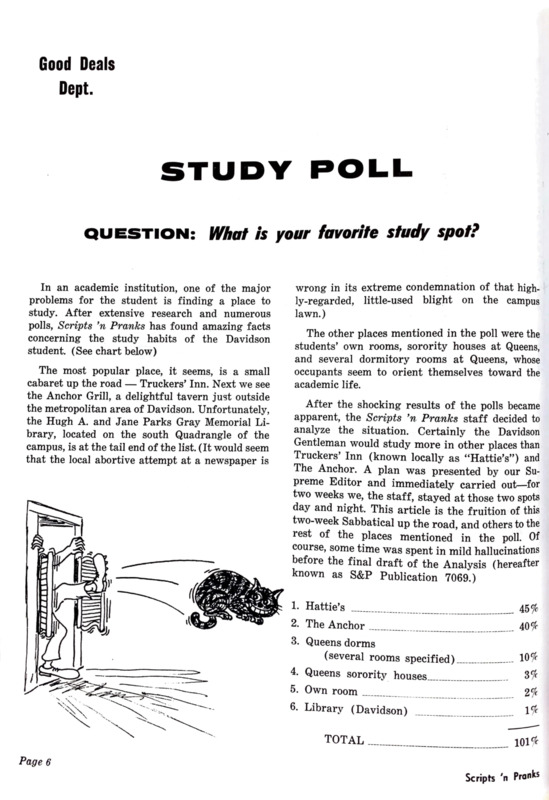 Insider jokes for Davidson college students were also important to alcohol humor. The penultimate issue, December of 1964, includes a tongue-in-cheek article by Pete Myers ‘65 entitled “Good Deals Dept. Study Poll.” The fictionalized poll participants were supposedly answering the question, “What is your favorite study spot?” In the poll “results,” 45% said Hattie’s was their favorite study spot. According to a graduate from the class of ‘68, Hattie’s was one of the most popular bars for Davidson students to go and drink beers with their friends [5]. Its slogan was “just up the road,” as it was located just outside of Davidson because alcohol was still illegal in the town until February of 1969, according to Blodgett and Levering [6]. The “Study Poll” describes visiting each place from the poll results, with a stop at Hattie’s because it had “been almost two hours since they had had anything to drink--and a growing boy needs lots to drink” [7]. The "growing boy" joke is evidently about alcohol but the Hattie’s humor might mean little to an outsider. The use of insider knowledge is common throughout humor in student publications, creating a sense of “in-groups” and “out-groups.” 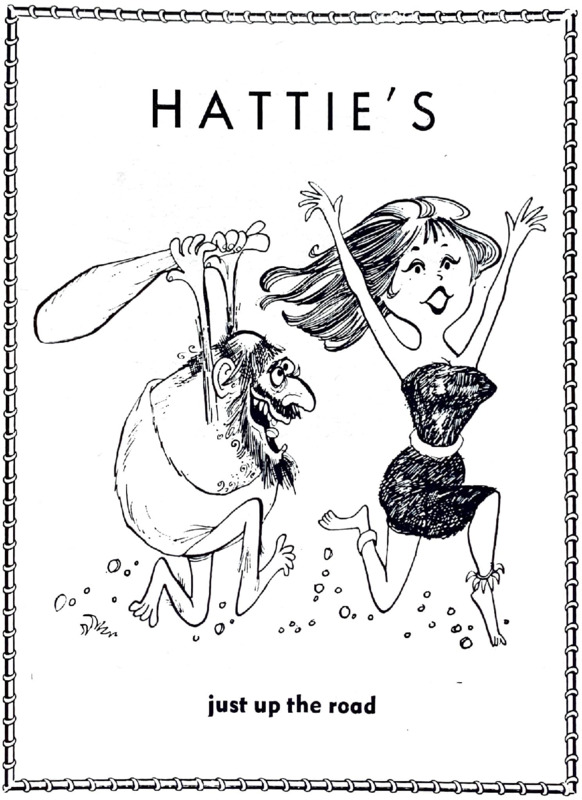