This website is dedicated to exploring attitudes and policies toward alcohol at Davidson College during the 1960s, right before the school officially allowed consumption on campus in the fall of 1968. This website is divided into both a timeline (below) and thematic pages. The timeline outlines the major alcohol policies and events on campus throughout the '60s. The site also contains pages that explore particular themes related to alcohol, specifically religion, humor, and student life.

National and statewide conversations on alcohol help contextualize the conversations that Davidson students were having on the subject. Alcohol has long been a topic of debate in the United States, with U.S. citizens embroiled in disagreement about the morality of alcohol for most of its history. Of course, the debate peaked when the country outlawed the manufacture and sale of alcohol in 1920, but continued after Prohibition’s repeal in 1933 for decades. Many organizations remained hesitant to openly allow or endorse the consumption of alcohol – including Davidson College. 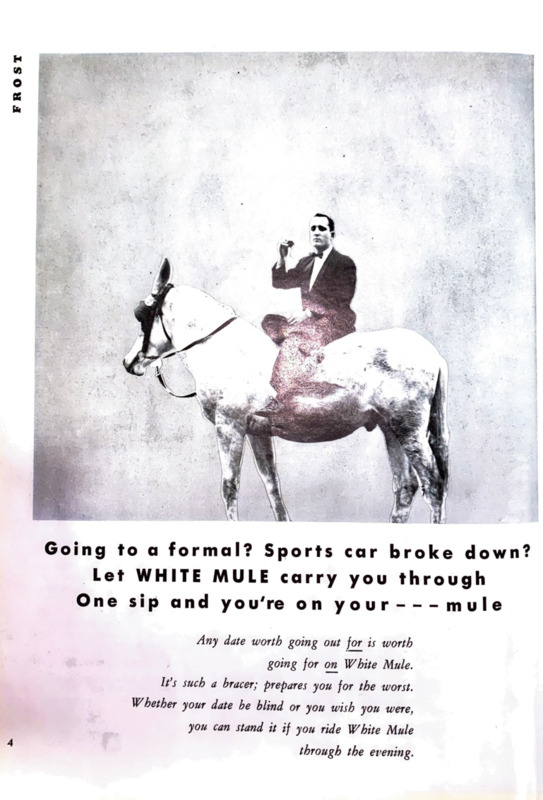 North Carolina was the first state to enact a Prohibition-style law disallowing the sale of alcohol in 1908, and the town of Davidson had been dry even before the statewide ban [1]. The Prohibition era did not change Davidson much as a result, as it had been dry for over a decade when Congress passed the 18th Amendment and would remain so after Prohibition officially ended in 1933 [2].

North Carolina has been stricter regarding alcohol consumption throughout its history than much of the U.S. Moonshine production therefore became a huge industry in some North Carolina counties, such as Wake County [3]. Various Davidson student publications from the 1950s containing alcohol advertisements illustrate that the country was warming up to the normalization of drinking in the post-WWII era [4]. A fake ad for “White Mule,” or moonshine, in the April 1958 Scripts ‘N Pranks parodies the trend for alcohol ads to directly target vulnerable populations, like college students. Nonetheless, alcohol was still hard to find in North Carolina; liquor-by-drink sales were illegal in North Carolina until 1978 [5]. According to historian Johnny C. Binkley, one could drive from Raleigh to Charlotte and never pass an establishment selling alcohol during the ‘60s-’70s [6]. 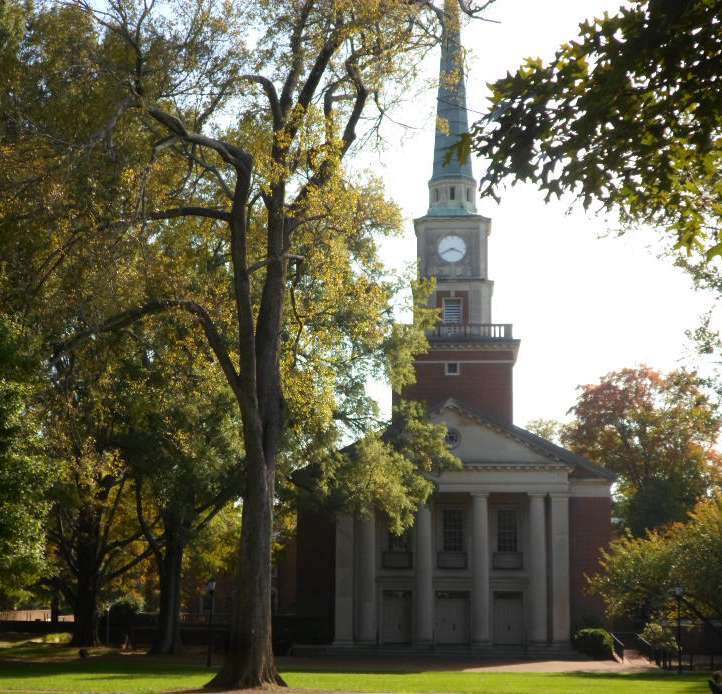 Davidson’s roots as a Presbyterian institution also have played a role in its attitude towards alcohol. While the Presbyterian Church did not actively discourage alcohol at the time (it promoted moderacy), the legacy of Prohibition likely could have affected Davidson’s policies [7]. Religious groups largely pushed for Prohibition, and the authors believe that Davidson’s background (and North Carolina’s historically high level of religious participation) contributed at least in part to Davidson’s comparatively slow allowance of alcohol consumption.

Davidson officially allowed alcohol consumption on campus in the 1968 fall semester. The next year, the town of Davidson followed suit by allowing the sale of alcohol [8]. At the time, North Carolina’s legal drinking age was 18 for beer and wine and 21 for hard liquor. This reflected a stricter policy than much of the rest of the US, though change was soon coming. In 1984, the United States established a federal minimum drinking age of 21 [9]. Ultimately, Davidson officially became a wet campus at a time of renewed conversation surrounding alcohol consumption and its consequences in the post-Prohibition era, yet Davidson students had been drinking discreetly for decades both on campus or at local bars outside of town, like Hattie’s.