In this year, student activism heats up around the country. Although Davidson remains peaceful, students make their voices heard through student publications. In fact, some of the sharpest criticisms of the Vietnam War are from 1969. Included on this page are three works from the 1973 Inklings, which features writing from a class’s freshman year. Thus, the pieces from the 1973 Inklings were actually written during the 1969-1970 school year. We also looked at a poem from the 1969 edition of The Miscellany, a student literary magazine that ran from 1965-1984.

The Adventures of Harry Harless

In this satirical essay written by Jim Bailey '69, Bailey mocks the counterculture movement by personifying it into one person: Harry Harless. [1] In this fictional narrative, Harry attends Southern Bigot University and quickly realizes he is out of place among bigots and racists, and he decides to form his own club to reform the campus. Unfortunately, Harry is the only person in his own club, and his attempt to bring change turns him into a monster as his hair rapidly grows out of control, causing panic and destruction. This satirical representation of Harry Harless seems to articulate a common understanding of hippies or counterculture protests as laughable and not something that was taken seriously at Davidson in the late 1960s. Student activism and protests were common elsewhere across the country and in international locations, but Davidson remained inwardly focused.

Published in the 1969 Miscellany, Mark Robinson ‘69’s poem “War Victims” is a somber remembrance of the U.S. soldiers who lost their lives at war. [2] With four quatrain stanzas with an “AABA” rhyme scheme, Robinson conjures up imagery of piles of dead bodies, a gruesome tableau that emphasizes the emotional toll of death. He uses an autumnal comparison; “they lie like tenpins scattered on a lawn. / Or leaves just fallen, not yet blown away.” Contrasting the vitality of a tree to the young men who lost their lives, Robinson clearly intended to evoke a sympathetic response to the people (most of whom were around his age,) suffering the brunt of American losses overseas. The victims he memorializes seem to be American men; unlike the similarly named “War Poems,” Robinson does not focus on the cost of war for the Vietnamese. Nevertheless, “War Victims” is one of the only student works that is explicitly about the Vietnam War from that time period itself. 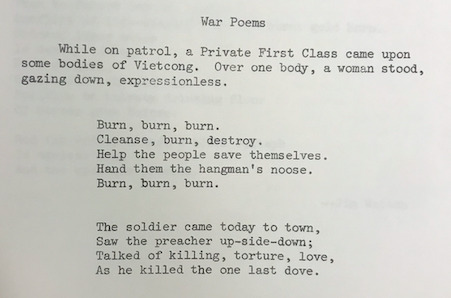 Appearing in the 1973 edition of Inklings, the nature of the publication means that “War Poems” would have been written in 1969. [3] Preceding the Kent State Shootings by one year, “War Poems” was written in the context of a nascent but still small student protest movement. “War Poems” is surprising, with its strong anti-war stance, for that reason. This was one of only a handful of student creative works from this time period to explicitly condemn military action in Vietnam. Carl Patterson ’73 uses a simple rhyme scheme and repetition to emphasize the collateral death and destruction caused by war. “Burn, burn, burn,” he writes, “cleanse, burn, destroy.” Patterson portrays this decimation as an integral aspect of the US war effort, for every nameless soldier that gets sent to the front. He ends the poem with an imagined prayer from a soldier, who asks that God be on their side in the fight and that the speaker stays alive. Patterson reminds the reader of the psychological toll of war for all involved, and the duality of a draftee being both a victim and a perpetrator of war. “War Poems” stands out as one of the strongest political statements conveyed through student creative work during the Vietnam Era at Davidson. 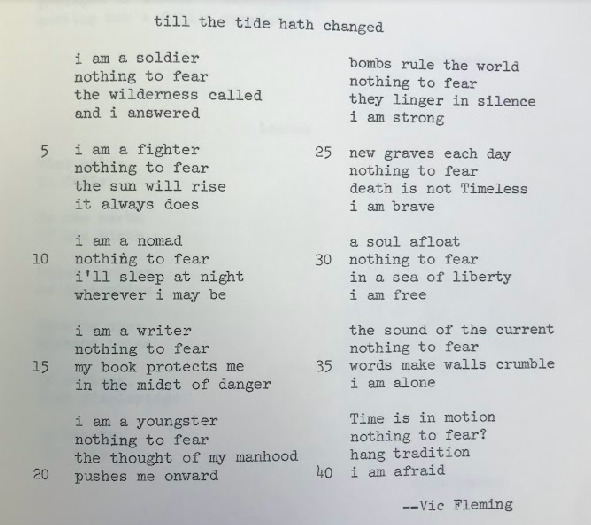 till the tide hath changed

Appearing in the same publication as “War Poems,” (1973 edition of Inklings,) Vic Fleming’s ‘73 “till the tide hath changed” is a politically charged exploration of the notions and emotions of a young American man. [4] It opens with a declaration: “i am a solider / with nothing to fear,” which is repeated throughout the next five stanzas (“I am a fighter,” “a nomad,” “a writer,” “a youngster.”) Each time, Fleming adds that the speaker has nothing to fear, emphasizing his own youth and arrogance. The speaker asserts that “the thought of my manhood / pushes me onward,” showing that despite the fearlessness of the speaker’s statements, he remains young and naive about the world. Cracks in the bravado start to form in the latter half of the poem, as the pattern of repetition breaks down. The speaker no longer talks about his own identity, but the common trauma of those his age, saying: “new graves each day / nothing to fear.” Finally, he admits that he is no longer able to live up to the vision of manhood set forth for him, given the death he is witnessing. The final lines of the poem create a startling emotional vulnerability as the speaker concedes, “hang tradition / i am afraid”. Fleming’s poem does not explicitly reference Vietnam or the military. However, he does examine the relationship to mortality held by the speaker, a young man who could stand in for many Davidson students of the time. Although opposition to the war may have seemed to be only prevalent on other campuses, the fear of being drafted loomed large in campus discussions at that time. “till the tide hath changed” is a perfect example of how student creative work mirrored the real issues of the era.