1968 was described by the editors of history.com as “one of the most tumultuous single years in history” [1]. With wartime news including increasing body counts, the My Lai massacre, and the Têt Offensive, conversations and activist efforts about Vietnam were heating up around the world. Despite external turmoil, Davidson students tended to focus inward, engaging most with on-campus issues. Students were largely indifferent to international protest and student activism. Additionally, the presence of ROTC on campus was seen as a joke rather than a purposeful military institution. These trends are demonstrated in campus literary publications, which we showcase with excerpts below from the Quips and Cranks Yearbook and the Davidsonian (student newspaper.) Last, we will feature an excerpt from an ROTC mission statement delivered to Davidson which illustrated the idealized purposes of the ROTC institution. 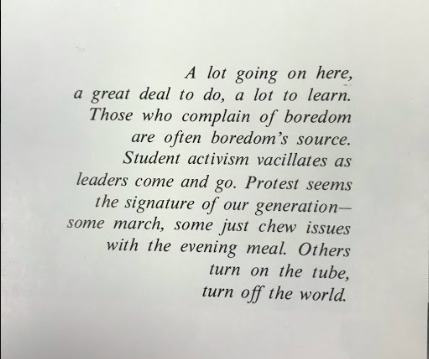 Written by an uncredited member of the yearbook team, this caption appeared on a student activities page in the 1968 edition of Davidson’s yearbook, Quips and Cranks [2]. Themed around tradition and change, the 1968 captions take the form of free verse prose poetry and serve as a good introduction to the atmosphere on campus through the late ‘60s. Many of the captions use enjambment liberally, emphasizing parallels within the sentences (“Those who complain of boredom / are often boredom’s source.”) The message in this caption is consistent with the activism trends at Davidson and nationally in 1968. A dedicated subset of students engage in visible antiwar activism, but most students do not. The caption writer also points out the perceived apathy of some Davidson students, noting television as a favorite escape from ‘the world.’ Despite the creative use of poetry as captions, the tone remains neutral and observational. Whoever wrote it remained true to the intent of a yearbook, memorializing the specific experiences of a certain class year.  Even though this poetic caption does not reveal the speaker’s feelings towards war or protest, it does indicate that Davidson students were engaged enough in discussions about Vietnam to justify inclusion in Quips and Cranks. 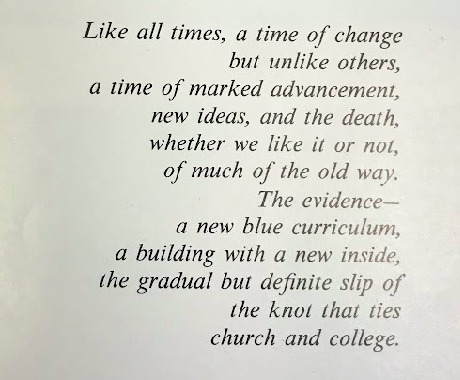 This second caption from the 1968 Quips and Cranks was also written by an uncredited member of the yearbook team, and it broadly speaks on the rapidly changing times of the world and of the Davidson culture [2]. The caption begins with a statement describing that times are changing as always, but diverts from this absolute by mentioning the anxiety over the ongoing change of the time. The unknown writer then elaborated on a new curriculum, campus renovations, and a growing distance between mandated church activities and Davidson students. These campus-specific changes are given the most weight in the caption, with no mention of the turmoil happening in the rest of the world. Whether they were focused on global instability or their own campus issues, the caption casted this generation of Davidson students as angsty youth, preoccupied with the “death” of the old ways. 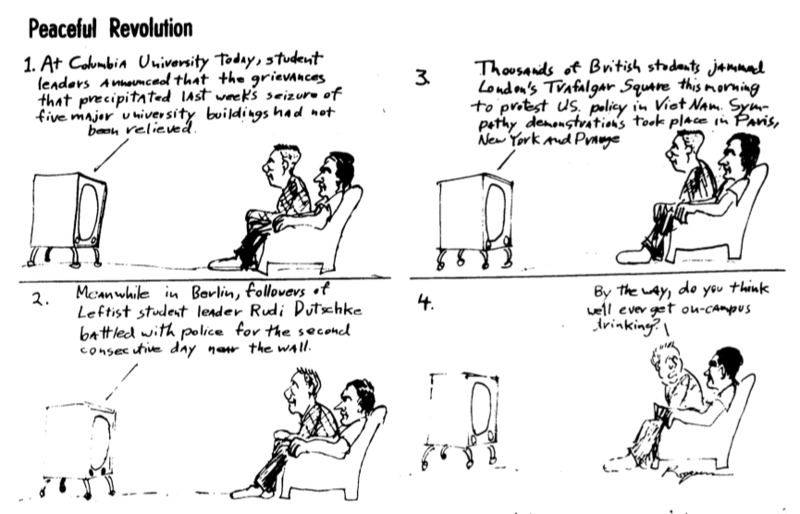 In this Davidsonian political cartoon from May 3rd, 1968, the artist satirizes Davidson students’ indifference to widespread political revolt [3]. Specifically, the two students listen to the international scenes of protest and student activism with a calm indifference and decide to discuss Davidson’s prohibition of alcohol instead. This cartoon conveys that Davidson’s campus as a whole was not interested in joining the thousands of students already leading protests or marches around the country. Rather than being concerned with protesting American foreign policy decisions, they would rather be allowed to drink on the weekends and relax for once. In other words, there had not been a rallying point strong enough to push Davidson students off their couches and onto their feet for political action just yet. The artist mocks that his classmates are focused on issues surrounding their social life, not international politics. It is important to note that this source was written two years before the Kent State Massacre and is a useful point of comparison regarding Davidson attitudes toward protest before and after what happened at Kent State. (Although this cartoon is uncredited, the cartoonists for the Davidsonian at this time were Nat Heyward '68, Dick Poole '68, and Cullum Rogers '71.) 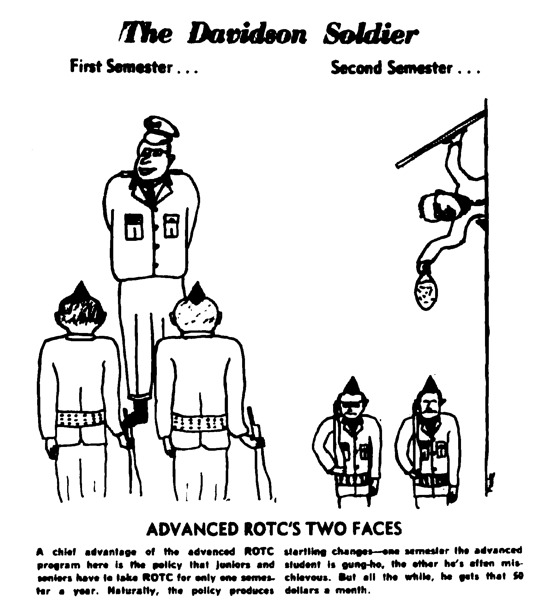 This cartoon in the April 5th, 1968 issue of the Davidsonian juxtaposed the attitudes of Davidson students in ROTC over the course of the year [4]. As the cartoon’s caption describes, juniors and seniors in ROTC only had to take part in the program one semester per year. According to the cartoon’s caption, this caused ROTC students to be enthusiastic about the program during one semester and “mischievous” the next. The cartoon has two illustrations portraying students being enthusiastic participants in ROTC in one semester, while the other depicts a student leaning out of a window about to drop something on two members of the ROTC program. In all, the cartoon focuses on ROTC’s mischevious social prescence on campus rather than conceptualizing the ROTC as a purposeful or militaristic institution. (Although this cartoon is uncredited, the cartoonists for the Davidsonian at this time were Nat Heyward '68, Dick Poole '68, and Cullum Rogers '71.) 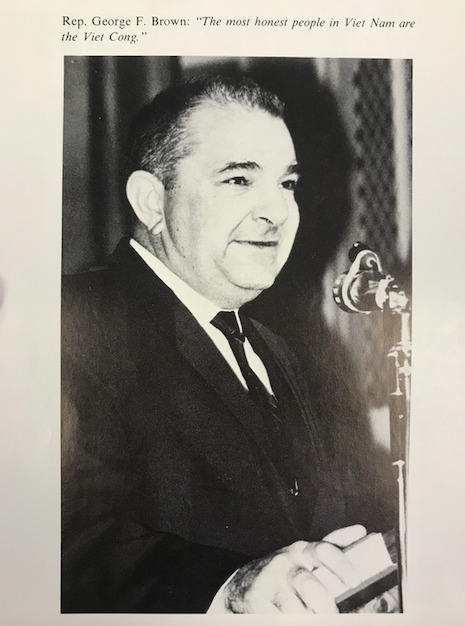 Representative George Brown, of California, was brought on campus during the 1967-1968 school year to discuss the Vietnam War and his opposition to it [2]. Here, his quote: “The most honest people in Viet Nam are the Viet Cong,” espouses a strong anti-war and anti-military stance. It is important to note that these views would have been controversial. According to Joseph Fry, “the majority of students were apathetic, supportive of the war, or simply too busy working,” with pro-war views even more popular at Southern schools (Fry 222). We can assume Davidson followed these regional and national trends. Nevertheless, the “Speakers” page in Quips and Cranks features a variety of speakers with differing political opinions, illustrating the continued importance of civil discourse on campus--and the value placed upon it by students. Davidson may not have had the dramatic student uprisings seen at other schools, but the moratoriums and other events served as a peaceful way for students to participate in wartime politics. 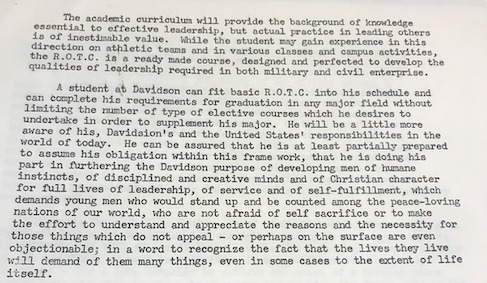 This mission statement written in 1968 prior to the Kent State massacre comes from the ROTC headquarters at Davidson College and discusses the values of the ROTC program [5]. The essay gives an overview of the ROTC program and how it connects to the college as a whole. More specifically, the essay argues that the ROTC’s values are an extension of those of the college and that the program allows students to become better people and Christians. Furthermore, the statement explained the fundamental importance of self-sacrifice, even if that meant one's life. Later in the Vietnam War, there were protests on campus against the ROTC, but outside of this essay, it is evident that the Davidson ROTC program was not taken seriously. Nonetheless, it is important to understand how the ROTC program visualized itself and its importance to campus as a institution with a strong purpose and great values.